Held There, Beside The Signified (Idle Chatter 004)

by V/A - Drekka, Pillars and Tongues and Skrei 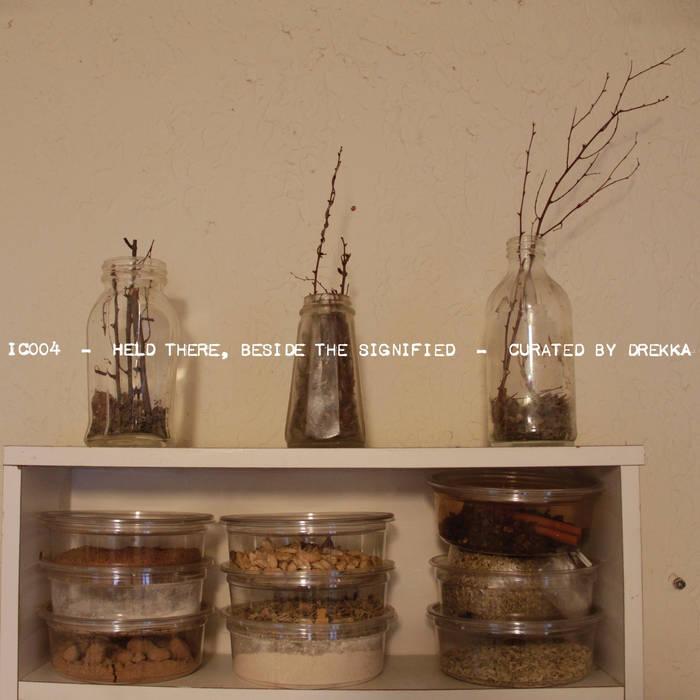 This is the second edition of the Idle Chatter curated series.
"Held There, Beside The Signified" was curated and designed by Drekka (aka Michael Anderson). It features new music by the Drekka, Pillars and Tongues and Skrei. This triple cassette set comes packaged in a white plastic three-cassette album.

IDLE CHATTER is a series presented by FABRICA RECORDS wherein one artist is selected to present a collection of three cassettes. This second edition is curated by DREKKA, with solicited contributions from PILLARS AND TONGUES and SKREI.

Working under the name DREKKA since 1996, Mkl Anderson has released large body of work on his own BLUESANCT label and many other labels internationally, including a series of three full-length LPs on DAIS RECORDS. Through extensive touring, traveling, and collaborating, he has collected memories and built an archive of corresponding sound; touching on the themes of silence and memory and noise and forgetting. Over the years, Drekka has explored early industrial tape culture, bedroom noise folk, and expansive cinematic textures. In the past decade, his gorgeous sound sculptures continue to evolve into cinematic ambient industrial genres, holding a place alongside contemporaries like Father Murphy, Tim Hecker, and William Fowler Collins; drawing inspiration from luminaries such as COIL, Cindytalk, and Nurse With Wound.

His work is very evidently personal. Rather than the obscurity that is so often the effect of experimental music, DREKKA functions as a direct line into Anderson’s mind, his dreams, and his fragile and tenuous cache of memories. These personal aspects and this fragility are even more clearly on display than if they were obfuscated by poetic abstractions.

While “haunting” and “hypnogogic” are words often used to describe experimental music and art, Drekka unequivocally occupies and explores those dark spaces which comprise the tenuous province of memory and dreams. And just as this can be said about Anderson’s approach to his own work, it can be said of the work which he has selected and assembled for his edition of the Idle Chatter series, titled ‘Held there, beside the signified’.

DREKKA’s contribution, Songs of Reunion is comprised of two 18-minute sound palindromes sourced from Anderson’s archive of ensemble recordings made in the early 2000s. Anderson says that these sound pieces are an expression of his “love for drone and gathering together players to meditate on one idea for extended durations of time.” These pieces are meditations on recurrence and thought as sound. It is a sonic wax and wane, an endless, minutely changing repetition represented.

Counted among those in the Songs of Reunion ensemble are Evan Hydzik and Mark Trecka of PILLARS AND TONGUES who have offered for their contribution, YOU / ALL UTTER LESS. Improvisations executed by various combinations of Trecka, Hydzik, Ben Babbitt and Beth Remis serve as source material for these three compositions which, like much of PILLARS AND TONGUES’ work, unfold like landscapes crossed in real time. The use of singing is central whether via heavily processed voices blurred into sonority or through the sole occurrence of a more traditional lead vocal when Babbitt’s voice comes sharply into focus, singing, “You are the lens through which I read / but my gaze is strained, you’re all I see.”

For the third cassette, DREKKA has invited SKREI; the work of GIUSEPPE CAPRIGLIONE, a Berlin-based Neapolitan sound artist, promoter, and label head working primarily in cassette and feedback manipulation and collage. Capriglione prefers not to speak about his work, which finds itself situated appropriately as the closing statement for this ‘Held there, beside the signified’.
Enigmatic provenance as open space for reflection, SKREI’s self-titled grit and drone is somehow both sonorous and atonal, evocative like the two other cassettes, of visual scenes, albeit in this case dimly lit. It’s as though SKREI places a blank canvas or a projector screen squarely into an unlit room where we are invited to attend.