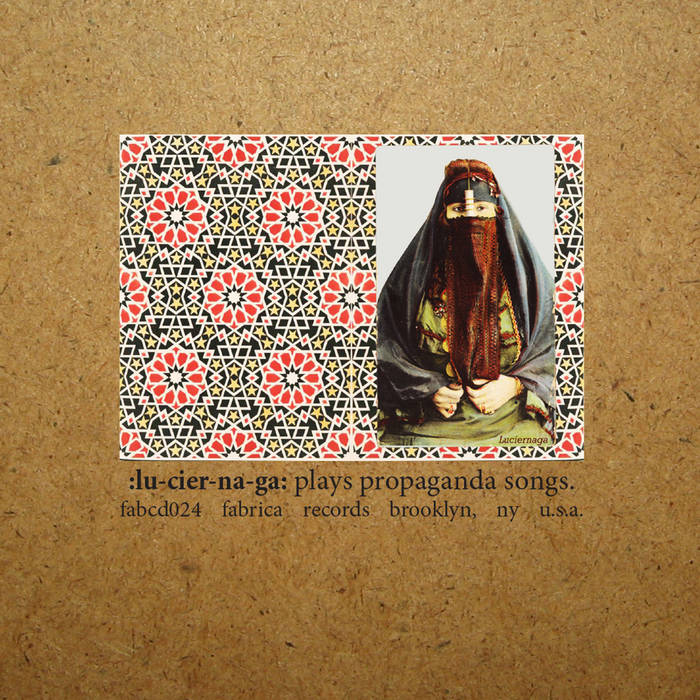 Originally released as a CD-R packaged in an hand-stamped and hand-numbered 100% PCW recycled chipboard arigato pak, with full-color art on the front an back. Each copy included a different card with islamic art on one side and a section from the "Mathnavi", an extensive poem written in Persian by Jalal al-Din Muhammad Rumi, the celebrated Persian Sufi saint and poet, on the other.
Limited edition of 50 hand-numbered copies.

"With a title like Plays Propaganda Songs, one knows that an album will be political. The amusement arrives knowing that this is a drone album about drone strikes. As one enjoys the hovering, wooshing and warbling sounds, one can’t help but imagine an armed camera in the sky, and to grow a bit paranoid as a result.

This is the rare example of a political album done right; neither timid nor inflammatory, it conveys hard truths in a palatable fashion. The choice to use muffled news samples and poetry in place of lyric song or rap was a wise one, as was the choice to include a prayer card decorated with Islamic art and a Rumi quotation. The only overt statement made is disarming: ”Dedicated to those who fight for freedom, self-determination, and universal human rights.” There must be a better way.

Before the opening sample begins looping, one catches the phrase, “These are Americans killed by test drone strikes.” The same technology that is meant to protect humans is turning against them, echoing the sci-fi scenarios of Terminator, The Matrix and the more recent Oblivion. Yesterday’s imagined terrors have become today’s reality. As the first (musical) drone grows in volume and stature, it drowns the voice of protest into submission like a Senate filibuster. Sirens sound in “A Lament For The Targeted Assassination of Samir Kahn” before becoming part of the tapestry.

Many of Luciernaga‘s pieces evoke a sense of dread, an emotion hinted at last year on “Angel”, found on the artist’s split release with Insect Factory. This time the emotion is primary. When one hears the sound of a sleeper on “The Weight of Breath”, one can’t help but imagine an impending victim, oblivious of the oncoming threat. ”Into Ashes” and “Closing Arguments” bring the point home, welding the sound of aerial motors to dark, teeming drones. In the final 1:38, the threat appears to end, then resurfaces with a vengeance. If listeners sit up, then the point is proven: terrorism cannot be fought effectively with additional terror."

All songs were performed by Luciernaga and were recorded during 2011-2012 at Union Street. They were then mastered by Sean Keane.