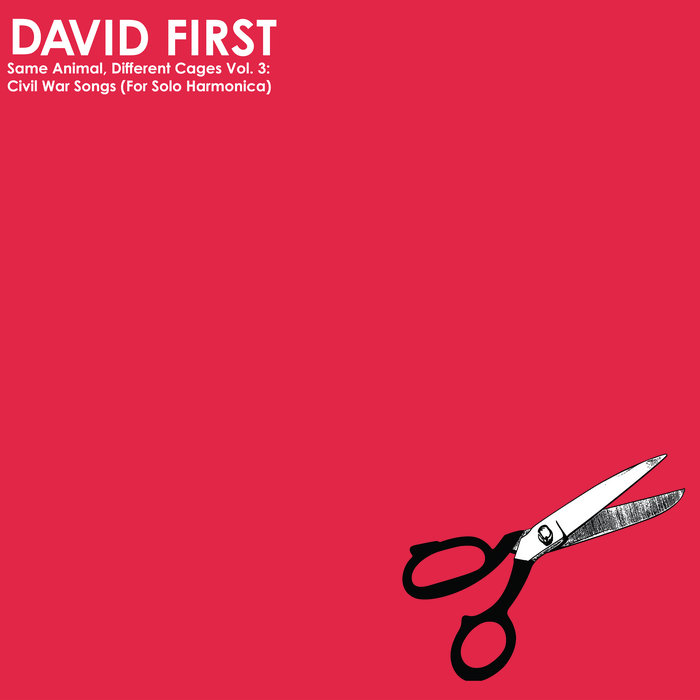 In the third volume of the Same Animal, Different Cages series, American composer David First does a 180 from the purely sound-for-sound’s sake explorations of the first two volumes and, in their stead, gives us eleven emotional outpourings performed exclusively on solo harmonica. Despite this minimalist single-instrument approach, First manages to make each of these songs sound fully realized, anything more would simply be crowding the sonic space.

From the high-pitched harmonics that open “Hymn for the Sick and the Poor”, the sorrowful tones of “Lamentations for the Killed”, the warm and playful “My Family of Friends”, minimalist drones of “Transition Chant”, to the hopeful swings of “The Truth Shall Reign Again Someday,” First has produced perhaps one of the first folk-music responses to the era of Trump and right-wing populism. But it’s more than that as well. The synth-like otherworldly sounds First coaxes out of his instrument on these tracks are a revelation—he has done nothing less than reinvent the harmonica.

Organic, soulful, melancholy and uplifting, "Civil War Songs" is protest music made for our times. In the face of this horrifying administration and the racist and fascist goons it has allowed out of the woodwork, First offers up a wordless experimental album that celebrates solidarity, friendship, community and principled resistance. Rather than providing an escape, these hymns wake you out of that paralyzing feeling of despair so you can find renewed focus and fight on.

This is an asymmetrical war being fought, where the enemy are those of us who are not entirely white, not wealthy enough, not on board with the "America First" rhetoric, not quite straight, not religious enough (or of a different religion), or who don't believe that "greed is good". We need new narratives, new fight songs to inspire us. With this album, David First is giving us just that.

Same Animal, Different Cages is made possible in part through the generous support of the New Music USA Project Grant program.

If you like Same Animal, Different Cages Vol. 3: Civil War Songs (for Solo Harmonica), you may also like: